Forty fourth Breach of the Gandak Embankment in past 24 Years

The Gandak breached its right embankment in village Semaria of Barauli block of Gopalgunj district in Bihar on the 19th September. This is the 44th breach in the Gandak embankment since 1987 and the according to the Annual Report of the Water Resources Department (WRD) of Bihar as 43 breaches are reported before 2010 floods.

The river had played havoc in 2002, 2004 and 2007 also and the same is going to be repeated this year too. Since the WRD cannot maintain the embankments and tried to prevent the water from flowing into the protected countryside for the past few days by building sand walls, which it chooses to call ring bundh or a retired line. It was this retired line that collapsed yesterday, the main embankment had already given way on the 16th.

Life of the people living in Gopalganj, Siwan and Saran is at stake just as it was in the Kosi basin a couple of years ago. The Government, however, can cpme out with an excuse that it cannot maintain the embankment that were constructed way back in 1750s by Dhausi Rai, a deputy of Nawab Mir Kasim of Bengal.

But before that excuse is given, the onus now falls on the Disaster Management Department DMD of the state to take care of the people hit by floods which essentially means distribution of relief and enforcing provisions of CRF and NCCF apart from plugging the breach in collaboration with WRD. A repeat exercise of Kusaha on the Kosi is in offing and the state machinery is gearing up for the same and talks about Mega Relief Camps are already in air. Relief is the second best option in such cases of dealing with the rivers but it is slowly progressing to the top post.

Vrinda Prasad Rai ‘Virendra’ , referring to the floods of the Kosi and Kareh, way back in 1966 had said in Bihar Vidhan Parishad, “…Yoy have built embankments on the Kosi and Kareh without making any provision for the escape of excess water… You enjoy watching the people in distress and you also enjoy distributing relief among them. This is what you have been doing for the past nineteen years.” Vrinda Prasad Rai is not there with us any more but his words still resonate in the ears of any right thinking person even after sixty three years and not nineteen years of independence.

Unfortunately, there is nobody left in the political sector to advise the Government on those lines. We all clamour for relief and get it as a matter of right now. How simple the solution is made out to be? Distribute relief after any foreseeable disaster and then pat your own back for helping the people and the people, in turn, forgetting that the basic reason for their miseries is one who is distributing relief, return the gesture by sending one to parliament or legislature.

Much before what Vrinda Prasad Rai had said in 1966, Ram Briksha Benipuri, a famous literary figure of Bihar had cautioned the Government (Bihar Vidhan Sabha) in 1956 saying, :…There are people in this country who always keep on look for emergencies and profit from them. They know that if the October rains fail, relief distribution would start and they start making rounds visiting the collectors, SDOs and ministers. These sharks wait for the opportunity that they will have a big fun once the relief operations start.

I suggest that an all party relief committee should be formed to keep a vigil on the relief operations and all precautions taken to prevent the vested interests taking advantage of the situation. You remember that sometimes ago when flood relief was in progress, criminal cases had to be instituted against 150 persons. I must say, if the relief operations are to be carried out, they should be carefully executed so that the history is not repeated.”

It is also a poser for the NGOs and their donors who presume that it is none of their business to go into the causes of the disaster. That the people are in distress and need help, they must be given. It is a job only half done if they shy away from going into the reasons of the disaster, learn their lessons and act accordingly. 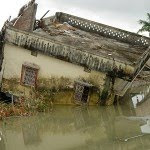