Lives on the Koshi’s sands 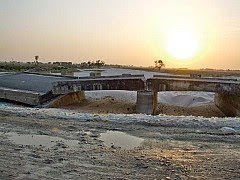 In August 2008, when the Koshi breached its embankment in Kusaha near the Indo-Nepal border and affected close to 2.3 million people in parts of eastern Nepal and northern Bihar, thousands of people from villages like Manganj East (Supaul) in Bihar thought the worst had come. But a week inside Bihar’s most vulnerable districts and it seems that “the worst” will always threaten the people in this part of the Indian state. Foreboding the breach will almost always be futile; the river will always surprise them, and come with the kind of force one has only seen in disaster films on television. After the floods, years will pass by without much change, leaving behind mostly fear, and acres and acres of fine white silt.

The village of Chandrayan proves possibly why these ‘predictions’ seem fairly accurate. This village may well be caught in a time warp since 1984, desperately trying to leap the years and catch up, but unable to do so. In September 1984, the Koshi breached its embankment 75 km south of the Bhimnagar barrage in Nepal. Chandrayan, along with 1,704 other villages, did not see the disaster coming and suffered its first flood. Residents of Chandrayan say that electricity here is still a far-off dream. Much was promised after the disaster, but hardly anything was delivered: a common complaint in the flood-ravaged districts of North Bihar.

Two years after the 2008 Kusaha breach, in another village called Givha in Saharsa district, it takes a while to believe what one sees: flat lands meeting the horizon in stark white. “Balu sab jagah hai” or ‘the silt is everywhere’ is a common refrain. There is no possibility of resuming agricultural livelihoods here, which in turn has been the reason for the alarming migration rates, pushing people to New Delhi and Punjab and further away. The village is almost a museum of disaster; everything looks antiquated because of the flood. Buildings are upturned and some, half-broken; it seems the Koshi may have just left.

It is well known that the Koshi has changed its course over 160 km from 1737 onwards. Dinesh Kumar Mishra—engineer, prolific writer, and convenor of the Badh Mukti Abhiyan, a community organiser in Bihar’s flood-prone areas says, this is because of the enormous amounts of silt that the Koshi brings from its upper reaches.

With a catchment area of over 74, 930 sq. km, the Koshi is Bihar’s lifeline, its swelling and oscillation a way of irrigation. But a myopic, tragic step was taken in 1953, when embankments were built on either side of the Koshi. A barrage was also built at Bhimnagar, at the Indo-Nepal border, to control the Koshi’s flow, which was entirely maintained by Indian authorities. If the course-changing nature of this river had been known and its massive shift plotted, embankments were obviously not a good idea. The solution would be, as Dr. Mishra has written in several publications and as has been advocated by many water activists, a way to manage the silt, and not just the water; to plan a drainage system that would channel the water to be of more use, instead of letting it log both inside and outside the embankments. Yet, the embankments at that time were built at a cost of IRs. 370 million, says Dr. Mishra. The cost of maintaining the embankments has escalated to close to IRs. 2 million, but little initiative has been taken to review the embankments and evaluate their performance after 50 years.

A village called Sirwar in Saharsa is one of the 380 villages (about 1.2million people) caught between the embankments. A kilometre’s walk from the Koshi riverbed, the village’s central building is a large school which is still being constructed. The people here are angry and disillusioned with the mechanisms of relief and rehabilitation, because they never fully recover from the floods. Every year, people relocate their shelters atop the embankments, some of them rebuilding their houses so that they live above ground level. But the Koshi has elevated itself 15 feet higher because of the mounting sediment levels between the embankments, which means the residents have to keep building their houses higher. Ram Prasad, who has been mobilising people from Sirwar and surrounding villages to start a movement against the embankments, put its very simply: “Kosi ko mukt kar do,” or ‘Free the Koshi’. Apart from the fact that they are condemned to a life on the embankments every year, losing and reclaiming agricultural land every year, villagers here feel like they have been forgotten. They almost never receive what they are entitled to. Further inside are the villages of Dalit and Mahadalit communities, who are among the most neglected communities of North Bihar.

Kavindra Pandey of the Badh Mukti Abhiyan says that in some villages, infant mortality rates are so high that women give birth to over 22 children. Of these, some are sent outside Bihar to bring back money and resources. There is no doubt the number of people who migrate out of Bihar are driven out because of floods, or in some parts of Bihar, the droughts. The floods, in the Koshi’s case however, are largely owed to the engineering flaw that the embankments wholly represent. Inside the embankments, the stories heard are mostly of desperation and utter dejection. But people cannot sustain either desperation or dejection for long, because come monsoon, when the river swells, the people have to wrap up their lives and put them on hold, so they can find another place to live.

So while 1.2 million people live unspeakably dire lives inside the embankments, there is no evidence that the embankments have improved the quality of life outside them. There is no evidence that what is commonly referred to the “1953 plan” in its 57th year has not done more harm than good. Or that engineering sense and bureaucratic reason have in fact lent lifejackets to the perennially submerged.