When the foundation stone for the Kosi embankment was laid on January 14, 1955, near Nirmali in Saharsa district in Bihar, euphoric people shouted, Aadhi roti khayenge, Kosi bandh banayenge (we will eat only half a chapati but we will surely build the embankment), writes the prolific engineer and activist Dinesh Mishra in his book, " Trapped! Between the Devil and the Deep Waters." No one really paid any attention to the protests and the fears of the people who would live with these embankments and what would happen to their lives. 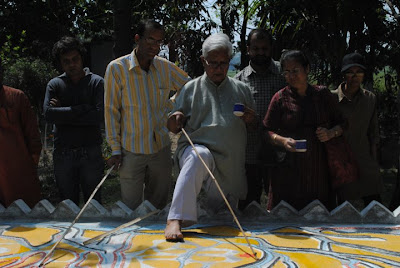 (In picture:Dr Dinesh Mishra with journalists from Indian cities explaining)
Fifty-five years later at least the first part of the slogan is true. Boxed between the embankments, the river floods every year, leaving behind fine white silt. A villager remarked to Mr. Mishra once that living in the Kosi region was akin to a camel's life in the desert. The fine white sand is everywhere. Like the wretchedness. It settles all over the land, over people, on their hair, their faces and bodies, giving them a whitish ghostly look. Swathes of it have destroyed
agriculture and made communication impossible. Cattle herds kick up a dust storm in their perambulations as half-clothed children mind them with a stick.

What is not covered with sand is waterlogged, packed tightly with water hyacinth. Much has been written about the Kosi River in Bihar and the tribulations of the people living in India's most unpredictable river basin. The Kosi River has moved 160 km — its shift has been plotted since 1737 from Sauradhar to Lajunia, says Mr. Mishra. It is well known that Jawaharlal Nehru first saw the floods way back in October, 1953 and ordered that something had to be done. Over one million people in 380 villages live in between the two embankments and their lives are caught in a time warp.

Visitors to the villages will be greeted with dusty, clamouring hordes of men, women and children full of rancour and complaint. They can do little else. North Bihar has several rivers criss crossing it but drainage has been a perturbing issue the embankments have not solved. Embankments are meant to control the river's flooding and the same sand has been stacked up to form artificial barriers that snake along the volatile Kosi while she goes this way and that, in a bid to keep her in check.

Steeped in the culture of water the people had words for every stage of the river. From the time the rivers start to swell with the first flush of rains till the big-time floods. The word "boh" describes how the water starts entering the fields once the monsoon has set in. That was a happy event, recalls Kameshwar Kamati, an activist of the Badh Mukti Abhiyan from Madhubani. The water made the soil fertile and did not cause much damage. But now people feared the major flood — called the "humma." "There is no boh now only humma," quips Kamati. In a region where cattle rearing is the main economy, agriculture was secondary. Yet it once boasted of 300 varieties of rice and people grew sugarcane, sweet potato, pulses and oilseeds. Since 1963 the Kosi barrage built across the border in Nepal was supposed to irrigate the land in India. 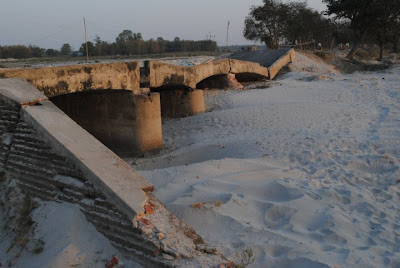 In 2008 the afflux bund breached for the first time at Kusaha flooding large tracts of land and killing 587 people. Over 3,700 are missing and the floods ravaged 993 villages in five districts. Before that seven breaches in the embankments have killed hundreds and now towns like Nirmali and Khagaria, which has seven rivers nearby, have concrete rings around as flood protection. About 18 districts of North Bihar with a population of 5.23 crore are affected by the floods every year. Despite
floods, the Bihar government has only just started building shelters on stilts, hardly a consolation. You can see a spanking new one on the way to Manganj East in Supaul district, where memories are fresh about the floods in 2008 after the Kusaha breach. Bhim Jadhav watched his sister being swept away in the water, and young Roshan Kumar is still to recover after a relief box fell on him fracturing both his legs. For two months, water stayed in the village and most people fled to Delhi and
other cities. "It was the first time we had floods. We had very good agriculture till then. Most of our cattle died in the water," says Mohammed Kalim.

Kusaha is only 70 km away from this village, it took two days for the water to come here unannounced. Since then 11-year-old Roshan cannot walk and his mother Geeta Devi has arranged for him to be taught at home. In Ghivha, 70-year-old Jalandhar Prasad recalls that when there was no embankment, the floods were manageable. "There is sand everywhere and agriculture is so difficult. Wheat needs more water and the borewells are drying up. Production has also declined," he adds. Akhilesh Mishra points to his water logged land." Now I can fish here instead of growing crops," he grins.

A broken bridge at the entrance of the village says it all and a dilapidated school with a gaping room destroyed in the floods has not been repaired. "We have got no funds so far for repairs," says Bhola Prasad Yadav, coordinator of the school. The school with 880 children has two other small rooms. The flood-affected landscape is not hard to recognise. In Birpur, only eight km from Kusaha, which bore the brunt of the floods, concrete houses have collapsed into the ground, roofs are open and the walls are titled at strange angles.

The plight of the people caught between the two embankments of the Kosi is miserable. The worst among them are the Musahars, an extremely backward community which lives on the edge. Landless and illiterate, most are sharecroppers. In the Hasuliya tola of Musahars, Jamila's son works in Punjab. Their homes were on the other side of the river but since three years they have moved here. This little hamlet has been displaced three to four times. There is no school for children and no
anganwadi. These are the people who are not supposed to be there, remarks Mr. Mishra, whose work on the Kosi river is legendary.

They have job cards under the National Rural Employment Guarantee Scheme but they are all blank. They keep changing their homes due to the vagaries of the river. People living near the embankment are faced with repeated migration as the height of the embankment is being raised as in Belwara. In Sirwar village in Saharsa district, Sarup Choudhary and family spend most of the monsoon on a machan, a raised wooden platform in his house. "We cook, eat and sleep on this small platform every year," he says. He is clear like others in this sprawling village right on the Kosi's erratic banks, that the embankments are the reason for the water flooding the area every year. The kharif crop is no longer possible and most people migrate for work. "Because of the embankments for three months we are stuck in water. Sometimes we go hungry," he adds.

"Often we eat only once a day," says Mukhiya. Everything is built on a height, the homes, the shops and even the only concrete building in the village — the school. The children spill around in the village as rarely do the teachers come. Health is a major issue. People have to cross the river at Rs. 5 a trip and there is only boat
available in the rains. The primary health centre in Mahishi, across, is open till noon and rarely does it have any doctors. Many die here to lack of medical attention, specially in the rains when the swollen river does not permit them easy access to the outside world. The little land they have gets eaten up by the river every year or gets submerged in the monsoon.

Despite the loss of life, the flooding, dwindling agriculture and phenomenal migration, there is no evaluation of the embankments till today. Engineers extol the embankments and say that they cannot be connected with the waterlogging and it was natural for low lying areas to be flooded. The breaches are a natural calamity as the river changes course. A sort of collateral damage. Engineers and politicians have
formed a coalition of the willing to support embankments. An engineer at the Kosi barrage guaranteed 100 per cent safety of the embankments —but what can one do against a natural disaster, he remarks. Undeterred by the lessons from Kosi, the Bihar government is pursuing a path of building more embankments in a bid to contain other rivers where the experiences are equally damaging. There is a strong case not only for a complete evaluation of the embankments as a flood control policy but
also for a cost-benefit analysis of the entire investment in embanking rivers in Bihar.